you can notice the excitement with lena, laura and jason. they will soon hear their song for the first time. composer, jakob schneider, wrote it especially for them. "we are the adikids" is the piece that the children and youth will learn to sing and perform in the coming weeks. yesterday saw the launch of this extraordinary project, in which movement, fun and a lot of information about healthy eating play an important role. farid zitoun and christian rüger from naturheilzentrum bottrop (nabo) got it underway. together with the creativity of the sb production company, they have ensured that a lot will happen in the spielraum on prosperstraße in the coming weeks - on and especially off stage.

cooking together will take place on four dates. "we have deliberately chosen simple dishes," says farid zitoun. "it is immediately clear, healthy cuisine is not complicated." and in compiling the list of ingredients, the alternative practitioner emphasized: "it does not all have to be bio/organic and extremely expensive. it is important for us is to create awareness among children. then the whole thing is feasible and sustainable." the vegetables for the minestrone, which is the menu on this afternoon, comes from the freezer. spiced up with fresh parmesan cheese and savory spices, the 6 to 13-year old project participants, together with farid zitoun and christian rüger, will create a healthy and at the same time delicious meal.

with just one mouse click go to the adikids recipe (pdf): 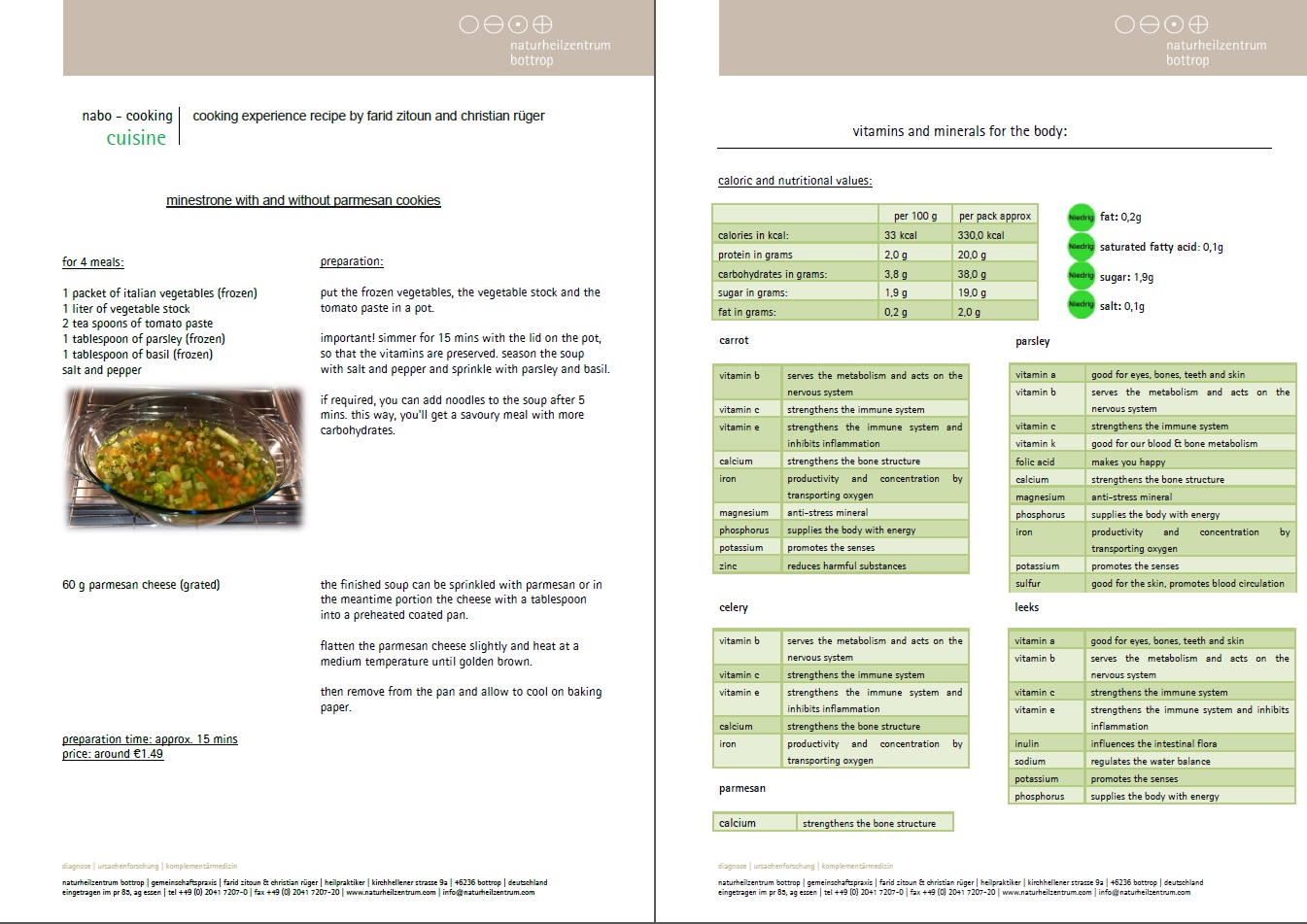 nothing works without vitamins

while the italian vegetable soup is simmering on the stove in the play-room kitchen, the "adikids learn a lot about vitamins and their function. “the carrots that we prepared earlier, are real vitamin suppliers," explains the alternative practitioner. vitamin a and c, potassium, calcium - the list is long. "all these minerals and vitamins have an important function in our body, providing firm, strong bones, good eyes, beautiful skin and beautiful hair. and they can make you thin. "the adikids" are impressed and totally focused on the matter. "i have purchased a whole lot," says farid zitoun, "so much that you can all take something home with you for tomorrow. then you can cook the soup together with your parents just like here. "the children are enthusiastic and really exhausted, because in the previous training session with jakob schneider and clarissa and dimitra papadopoulos, they had just given their best on stage in the big room just next to the kitchen.

next time on tv

"this will be an exciting time," say lena and her friends quite sure at the end of the afternoon. "and next time even television will come and report on us." by then, they will have learned the words of their songs and the choreography will be in place. "the adikids song is about us, about our group and healthy eating", reveals the youth. jakob schneider knows how its content is translated into dance. "cut the onions, grate carrots - all of which can be represented well." the kids will prove that the boys from blue motion pictures were here with the camera and filmed a documentary live on location. visible for all on the adidkids own youtube channel. the completed song can then be bought on itunes. norbert eickholt, head of the "house of generations - spielraum" of the department of youth and school, is pleased with the successful start of the project. "i would be pleased if existing networks and cooperations could continue to expand and i am glad that naturheilzentrum bottrop is our partner." sustainability is important for the commitment of the bottrop alternative practitioners. therefore, the support of the "adikids" will continue. on tuesday, there were cool nabo t-shirts for all project participants for the first time. in addition, farid zitoun, christian rüger and jakob schneider brought a check with them. with the proceeds that came together on the nabo-initiated musical evening in november, the work of the bottrop group, a service of the association of obesity, is further supported. "additionally, 100 percent of the the revenues gained through the sales of the songs on itunes will flow into the work of the adikids," says farid zitoun.

you’ll find all the latest news about health and naturopathy here: information on events at naturheilzentrum bottrop, things worth knowing from the world of alternative medicine, and practical tips for a healthy life - timeless and always up-to-date.